Ever wondered which double edge safety razor blade is the sharpest? Or which blade maintains its edge the longest? In this article, I outline the results controlled experiment testing DE razor blade sharpness.


Quick Sharpness Recommendation - The Best Blades For You

The plot above presents tested blade sharpness after a given number of shaves. "Cut time" is the time it takes a certain blade to make a cut in a repeatable experiment where blade pressure very slowly increases. As cut time increases, blade sharpness decreases. That is, the lower the cut time, the sharper the blade. All blades were tested until a 4 minute cut time was passed, or after 14 shaves - which ever came first.


This is an ongoing project, and there are many blades to test. This webpage will be updated regularly as further tests are performed.

If you want to understand the detail behind how this experiment was performed, please read on.


I’ll start with an introduction. I am a qualified statistical researcher with decades of practical experience. I am also a big fan of DE wet shaving! My work testing blades is ongoing, and takes time (especially when testing sharpness after each shave…I’m a daily shaver!) But for now I outline my approach to this experiment, and initial results. These results will be filled out over time. Here we go…


How can blade sharpness be measured? One possibility (which I pursue) is to measure force required to cut. If we consider a hair, we are talking about how much force is required for the razor blade to cut the hair. It should be clear we are trying to detect very small changes in force. To deal with the need to measure MINUTE changes in force, I use ‘cut time’ as a proxy. I cut a consistent material with force continually increasing (from zero) over time. To make experiment results with different blades comparable, this force is applied in an exactly repeatable manner.


So what is being cut in the experiment? Through experimentation, I discovered fine fishing line produced far more consistent results than other materials tested. This is as a substitute for hair (which for consistency and practical reasons won’t be used!) Ramp in force was calibrated to result in typical cut time of 2-3 minutes for a sharp blade. With a long ramp in force, differences in ‘cut time’ can be accurately measured.


Let’s consider some results. Each cut performed with a blade I call a ‘trial.’ See below for ‘cut time’ of a brand new (unused) Derby Extra DE razor blade. 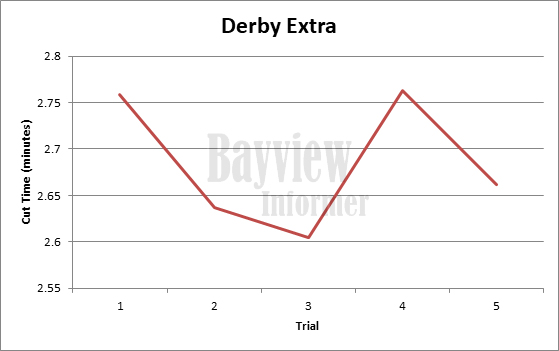 Five independent cuts were performed with the Derby Extra blade. The cut time varies for each trial. This is to be expected. If we calculate the mean (AKA average) of these cut times, we have a statistic that can be compared across different DE razor blades. In the case above, the mean cut time is 2.69 minutes. This in itself is not interpretable. See below for a comparison of several DE razor blades.


Figure 2. Comparison of Blade Sharpness across sample of DE blades

NOTE: As blades are brand new and unused, blade coatings WILL affect these results.


There are several interesting features in this plot.


Firstly, of the currently tested blades the Feather New Hi-Stainless is the sharpest. Anecdotally this was expected.


There is not much difference in the average cut time for the following blades:


It was unexpected that the Derby Extra would show similar sharpness to a blade such as the Polsilver. Anecdotally the Derby Extra is known as a mild blade. I hypothesise may be due to blade coatings (more on this later.)


A BIG surprise is the result for the Kai Razor Stainless Steel. Anecdotally this is touted as second in line in terms of sharpness to the Feather. But in this experiment, it is the least sharp blade! This could potentially be explained by blade coatings as well...


Most blades are coated with various materials to improve the shave comfort. These coatings vary between blades. A brand new unused blade coating (if present) may impact on blade sharpness when testing an unused blade. Consider the 5 trials performed for the UN-USED Wilkinson Sword (Germany). 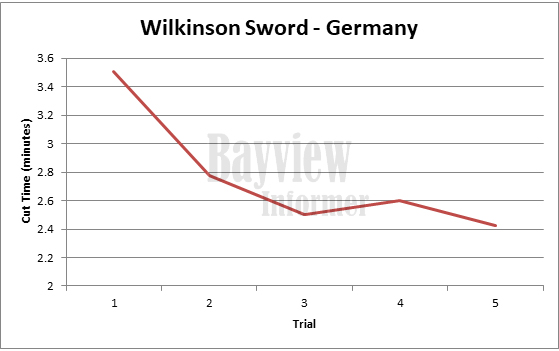 The result for this blade has an interesting feature. It can be seen that as the trials progressed, the cut time reduced significantly (around 3.5 minutes, to under 2.5 minutes). As each cut is performed in EXACTLY the same point on a blade, I speculate this is a consequence of the blade coating gradually removing during testing, and improving blade sharpness.


As a result of this phenomenon, I expect the Kai to drastically improve sharpness as the apparent coating is reduced (but this experiment has not yet been performed.)


We want to be able to distinguish blade sharpness statistically. While we have calculated the mean (or average) cut time, we also need to understand the variability in measurement across the trials. I represent this through a confidence interval around the mean. 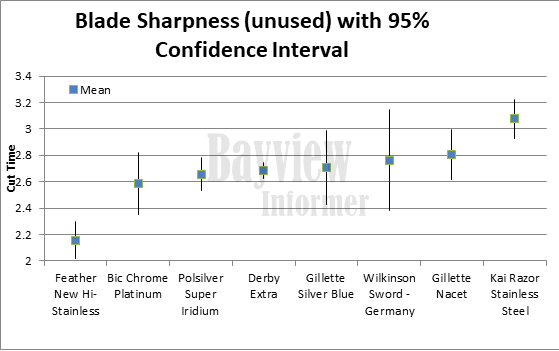 
With this result, we can state statistically significant differences:


-An unused Kai is PROVEN to be less sharp than the BIC, Polsilver, and Derby (most likely due to the Kai blade coatings.)


This raises the point that we probably don’t want to use brand new unused blade sharpness to represent a shavers likely experience with the blade. The exception being the Feather. The Feather is clearly very sharp out of the box, and for a shaver that uses a blade only once and wants maximum sharpness, this test may indicate the Feather is the way to go.


Each person’s requirements of a blade differ. As described above, some shavers may only use a DE blade once, whereas others may use each blade for weeks or more. As a result, I measure blade sharpness after a count of shaves. This is demonstrated for the Wilkinson Sword(Germany) below. 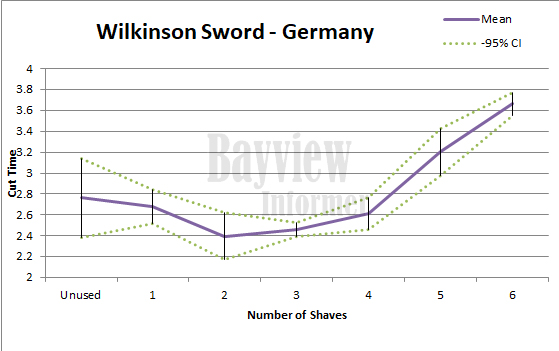 It can be seen that the Wilkinson Sword (Germany) seems to reach its sharpest point after 2 shaves. From shave 3 onwards, there looks to be a trend towards decreased sharpness. I should note that a “shave” for me is performing a three pass shave (broadly WTG to XTG to ATG).


Regarding statistical significance, we can reduce the size of the confidence interval by increasing the number of trials. But this takes time for testing. I intend to vary the number of trials depending on the importance of the difference I want to prove.


Where to from here?

I need to do a lot of shaving to fill out these results!


I currently have stock of many other blades which have not yet been tested. In addition, should other DE fanatics find this page informative, I will happily purchase additional blades for testing by request (contactable via email address at ‘Contact’ webpage link at the top of the page).


Additional blades which I own, and will be testing in future:

Bayview Article: In this article, you will find a review of the Tabac Original product range, a guide to the fragrance, and recommendations for use.

Bayview Article: NIvea are quality products at a very reasonable price. When navigating their range, we help you find the best product for your skin.


Bayview Informer is a participant in the Amazon Services LLC Associates Program, an affiliate advertising program designed to provide a means for sites to earn fees by linking to Amazon.com and affiliated sites.